PANTO SCRIPTS pantomime scripts for am dram and one-off productions

“Many thanks for the script I have had a read and absolutely love it, I have performed in Pantos for the last 10 years and this is undoubtedly the funniest script I have ever read!”  Peter Ward, Kingfisher Players, May 2010

“What fun everyone had. Once again an interesting, witty and modern script from Chris Lane. Fascinating: I’m sure a number of societies will be interested in using it (or at least they ought to be)”   NODA SW Regional Councillor

“PANTO SUCCEEDS ON ALL COUNTS”

“That was awesome and can I go again tomorrow?”, I overheard a boy saying to his mother as the audience was leaving. He is a perceptive critic. In good panto tradition this show is a generous mix of song and dance, spectacle, audience participation and comic business. This is wonderful family entertainment. PRESS REVIEW: DICK WHITTINGTON; NELSON, NEW ZEALAND

“We’re doing a staff panto this year and got a fantastic script from http://www.pantoscripts.me.uk – it’s really funny and the guy who writes them has been brilliant and given us loads of advice via email.”   TIMES EDUCATIONAL SUPPLEMENT 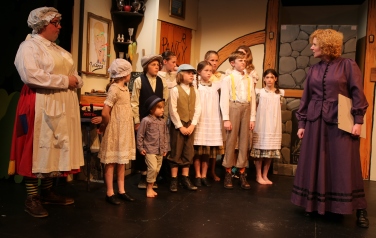 I imagine you have been set the awful task of finding a pantomime script that is:

original yet the classic stories

within the scope of amateurs

not going to cost thousands

can be home-printed, edited and filmed at no extra cost

and which has already been fully workshopped and tested in award-winning shows!

In which case you are in luck AND it will cost you less here than anywhere else. In fact’ if you’re raising funds for a cause (like ‘Help the Heroes’) or a School, or Retirement Home, it is totally free.

Why? I make my money now from my books and movie screenplays: this is just for fun.

I’m sure by now you have looked at other web-sites and at published scripts and – like the rest of us – found them to be dated, sexist, racist, rude, TV-based, long, boring and unoriginal.

(Have you seen the site with scripts that feature references to ‘The Sweeney’ and ‘Allo Allo’?! Or even ‘Dixon of Dock Green’ which ended in 1976. Seriously! If a policeman enters and says “Evening all’ the script was written that long ago.)

Well relax – you’re safe here. No ancient TV ‘jokes’, or humour unfit for kids’, or racism, yet still funny for the big-kids in the audience!

Award-winning shows in performance all over the world every year. And also in a wide range of versions to fit your needs:

All over 80 and need to perform sitting down?

Must last about 10 minutes?

Not a problem. Have a look here. Scripts are available here to download straight away!

If it really doesn’t work for you, or you need a Word version, then let me know, otherwise you just need to get in touch to tell me where and when you want to use it (to avoid a clash)